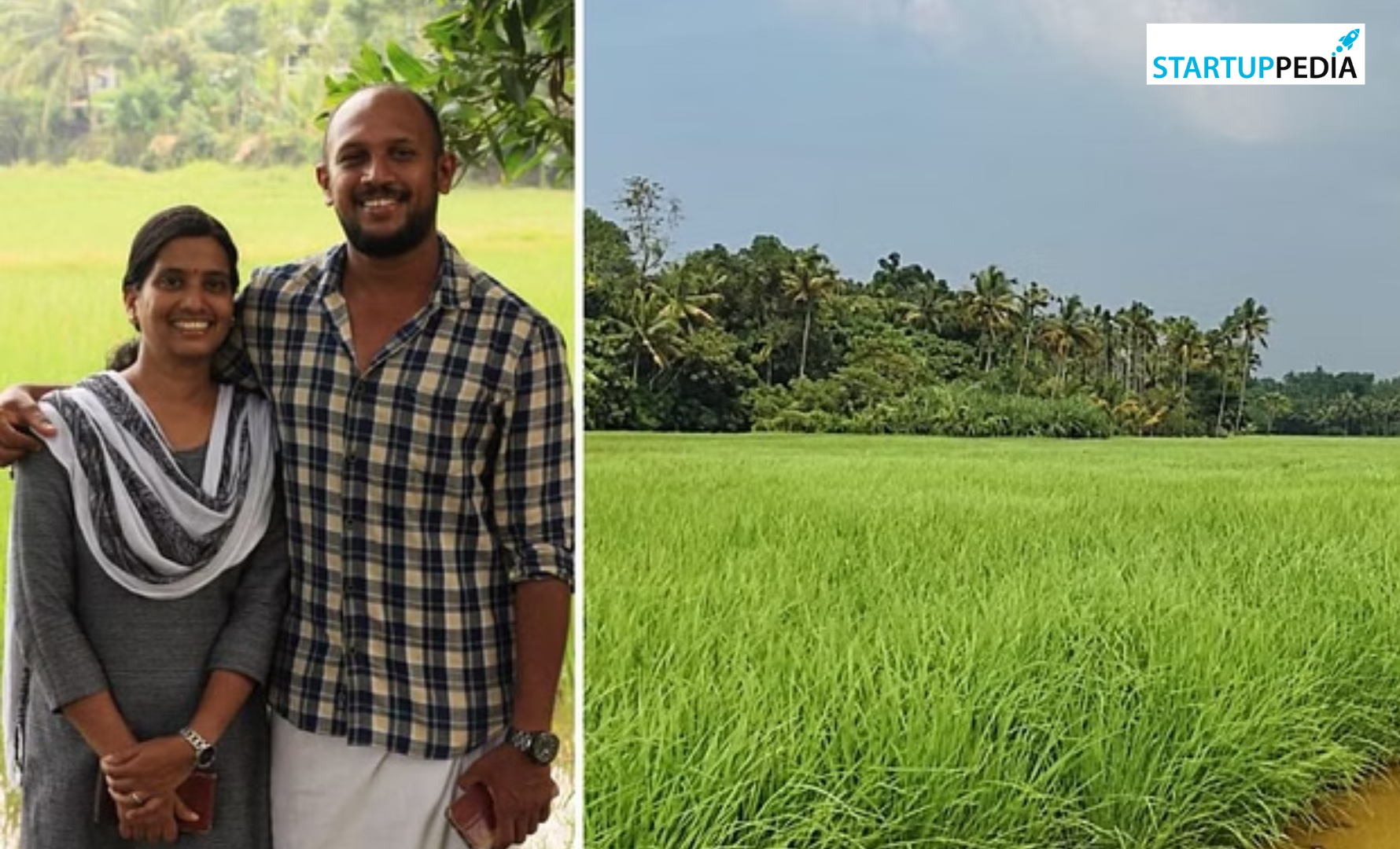 From high-paying corporate job to farming

Pavithra A and her husband Mohammed Rinas from Kerala never loved the hectic city life while residing in Mumbai. They missed access to clean, wholesome food and being in nature. The couple constantly searched for the ideal chance as they desired to return home.

At that time, Pavithra heard about a Kerala-based Salim Ali Foundation project. She grabbed the chance to return home. So, She quit her position as an HR generalist at a multinational company in 2016 to work as a project coordinator for the foundation.

Within a year, Rinas left his job as an oil and gas mechanical engineer to live with his wife. In Vellangallur panchayat in Thrissur, Kerala, the couple contributed to a project for the foundation. Their main initiative was to encourage thoughtful and self-sufficient growth in the region.

The couple was inspired to start organic farming after working on the project for a while. Soon after, they leased a 15-acre plot of deserted land in Vellangallur and converted it into an organic farm where they grew conventional rice varieties.

They are currently cultivating 20 acres and producing an average of 15 tonnes of paddy every year. Additionally, they offer value-added rice items such as flattened rice and puttu (logs of rice flour cooked with coconut).

“The shift wasn’t easy, but I don’t have any regrets,” Pavithra tells The Better India. “I hated working in air-conditioned offices, and I am now happy that I get to work on the field, that too for a social cause,” she says.

They claim that this experience gave them access to a completely different path, which ultimately motivated them to pursue agriculture.

Better India is briefed by Pavithra that they collaborated on the project to educate farmers about organic farming. Additionally, Rinas assisted the farmers with technology and equipment-related issues like installing drip irrigation systems and aquaponics, among other things. The couple learned valuable lessons while working on the project, including the significance of cultivating healthy food.

Rinas used to read online articles on farming when she was working in Mumbai. He didn’t get genuinely interested in it, though, until after finishing the project. He and Pavithra both had the same interests. They both agreed to begin growing paddy as Keralites consume a lot of rice, making organic rice production necessary.

But it was simpler to say than to do. Despite their decision to begin farming on 15 acres of land, Pavithra tells The Better India that they lacked the funding to get things started. To start their farming endeavour, they had to pawn some jewellery from Rinas’s mother.

Consequences faced by the couple

The area was disused for some years and was deserted. It was the first difficulty they encountered when they initially started farming.

They had no farming expertise, but they ultimately worked it out. However, using organic methods to grow traditional rice is more difficult because it calls for more labour. Cost-effectiveness is a problem as a result.

Finding a market for organic produce was another difficulty they encountered. Because there isn’t enough room on the market for their goods, they can’t sell organic stuff as easily as they can inorganic produce. The couple concentrated on traditional rice varieties because they thought they were more wholesome and sustainable than hybrid versions. They also believed that it was crucial to introduce wholesome and clean food to the market.

Varieties they produce and their future plans

Some of the traditional rice varieties they have so far grown include Rakthashali, Kuruva, Thavalakannan, Kunju Kunju red rice, Njavara, Kodukanni, and Pattambi. Kuruva and Kodukanni have produced the highest yields of any kind.

Traditional Rakthashali rice is in high demand since it has a number of medicinal benefits. But in contrast to other types, its yield is lower. Rakthashali yields about 700–800 kg per acre, compared to other types’ average yield of 1,200 kg.

From 20 acres, they could typically cultivate 15 tons of paddy.

Even though they were able to grow about 1,500 kg per acre for the first harvest in 2018, the succeeding years proved to be somewhat difficult. It was exceedingly difficult for them to find a pace because of the floods, typhoon Ockhi, and the pandemic-caused constraints. However, because things have been going well this year, they are optimistic.