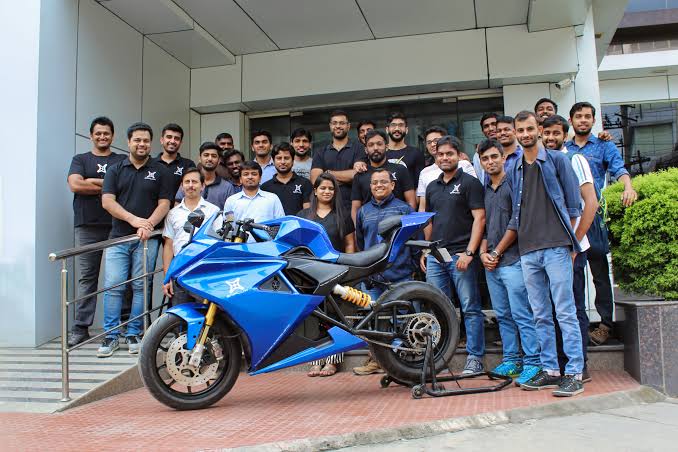 During FY2018E-FY2023F, the Indian electric two-wheeler market is expected to rise at a CAGR of more than 23 percent. Elon Musk once said that for people to purchase an electric vehicle, we need to balance the convenience of petrol vehicles. Nevertheless, when India, the world’s largest two-wheeler market, joins the EV race, the potential is immense. And this is precisely what the country’s first manufacturer of electric superbikes, Emflux Motors, based in Bengaluru, is aiming to tap into.

Ex-Jugnoo executives Varun Mittal, Ankit Khatry, and former TVS Motors designer Vinay Raj Somashekar founded Emflux Motors in July 2016. Varun Mittal is an alumnus of IIT Delhi with a passion for computing, robots, and fast bikes, of course. He went on to be part of two $100 million+ B2C startups after winning Robocon India in 2007, Jumia and Jugnoo as vertical head, and the core founder member, respectively. Nevertheless, he experienced a serious motorcycle collision that snapped his femur shaft in half, and, ironically, that’s when he began to follow his vision of creating performance motorcycles. The startup is registered with Startup India and has received a small grant from PRAYAS for developing its technology for the EV charger circuit.

Emflux: Milestone in the industry of superbikes

Emflux is a Bengaluru-based start-up that builds hybrid superbikes as well as proprietary technologies that can be used by other manufacturers of vehicles. The Emflux team was formed by Varun Mittal, Ankit Khatry, and Vinay Raj Somashekar and consists of 25 young engineers, programmers, and others from different fields, most of them fresh out of college.

By leveraging the patentable technology they have developed for Emflux ONE, Emflux wants to help other businesses improve their EV solutions. They will develop the electric drivetrain for two and four-wheelers, including the battery, BMS, charger, motor controller, and engine. By selling high-performance bikes and also by licensing their technologies to OEM companies as well as creating tailored solutions for others, Emflux can earn revenue.

With 700cc plus bikes, Emflux has designed India’s first electric high-speed bike that can go neck and neck in performance. The Emflux ONE was supposed to have a superbike’s dimensions and violence mixed with the composure and quiet of an electric car. EMFLUX ONE, the first iteration of the electric superbike, has already been presented by Emflux Motors at Auto Expo 2018. The founders concentrated on all three factors required to create a match for the product market, including the superbike’s performance, components added, and a robust testing framework.

Emflux plans to manufacture just 199 Emflux ONE units for the Indian market and a further 300 units for the global market. The regular edition of the Emflux ONE has priced on the road at Rs 6 lakh and the price will be Rs. 11 lakh on the road with the three performance enhancements of the Ohlins suspension, forged alloy wheels, and ultra-light carbon fiber panels. The Emflux ONE delivery will commence in 1Q19. They have Model 2 plans, which would have features identical to Model 1, but will be a two-variant naked sports motorcycle with different ranges.

The business recently received an undisclosed amount of capital from angel investors such as Narendra Sujan, Sujan Group Director; Samar Singla, Click-labs and Jugnoo Co-Founder; and Fabian Brian Crain, Chorus One and Epicenter Co-Founder. Also included in the round was current investor Meher Roy. The Union Budget 2018 also dedicated $40.5 Mn (INR 260 Cr) to help the business growth of hybrid and diesel cars for the quick introduction and production of electric (and hybrid) vehicles (EVs).

This would also assist up-and-coming start-ups of electric vehicles such as superbike manufacturer Emflux Motors to address the country’s current infrastructural challenges.

For its electric superbike, Emflux Motors is currently working on a top-down concept strategy, where the mission is to motivate 10 Mn electric two-wheelers with its two-pronged business orientation in India by 2027.

The startup plans to open offline centers of expertise in Bengaluru, New Delhi, Mumbai, where a client can step in and learn more about the bike. Besides, in the next five years, Emflux Motors aims to install 1000 EV chargers (known as WARP) on highways throughout India and Europe. These chargers would be capable of quick charging at speeds of up to 110 kW, as claimed by Ankit.