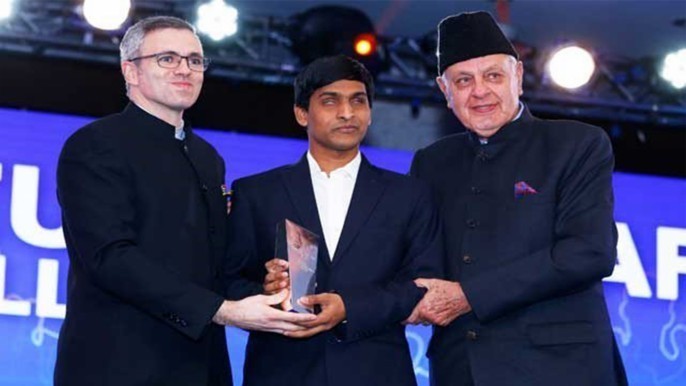 If one is differently-abled people either think his life is a waste or sympathize with him considering him a poor fellow. But today we are going to discuss such a personality who has proved all this wrong and is considered one of the most successful business tycoons in India.
Born to a poor farmer couple in Machilipatnam, a city in Andhra Pradesh in 1992 Bolla was visually impaired from birth. The villagers called his birth sin and suggested his parents smother him to death. But his parents bought him up with utmost love and care and worked hard to pay for his education.

With great difficulties, he used to reach his school as it was very far from his home. Life didn’t stop being difficult here. He was never allowed to participate in physical education activities and was always made to sit on the last bench due to his disability. When Bolla decided to study science after the 10th matriculation exam he was denied admission. He said in his InkTalk, “I was made blind by the people’s perception of the people”.

Bolla filed a case and after a 6-month long wait, he was finally allowed to pursue Science of his own risk. He topped his 12th exams with a whopping 98 percentile, But the main issue came here when he was denied admission to the Indian Institute of Technology where he had a dream of studying Engineering because he was blind.

But as fate would have it he went on to become the first international blind student at MIT, where he studied business management. He was given a lot of corporate opportunities in America but rejected them all as he had a bigger plan in mind. He was a youth leader since 2005 so after returning to India he joined Dr APJ Abdul Kalam in his initiative of Lead India 2020: The

Second National Youth Movement. It was an initiative started by the former president for helping India reach the goal of becoming a developed nation by 2020 by eradicating poverty, illiteracy and unemployment.

Bolla went on to co-founded Samanvai Center for Children with Multiple Disabilities in 2011 in which he started a Braille printing press, providing educational, vocational, financial, and rehabilitation services to students with multiple disabilities for an economically independent and self-sustainable life.

And in 2012 he finally launched his dream of training and employing differently-abled people by launching Bollant Industries with funding from Ratan Tata which also manufactured Areca-based products.

This shows how much of a compassionate person he is with great business sense. A famous quote which he used in his struggling days was. “World looks at me and says Srikanth you can do nothing, I look back at the world and say I can do Anything.”

A movie capturing the struggle and essence of life that Srikanth has lived and making an example for others like him is also being made in Bollywood.