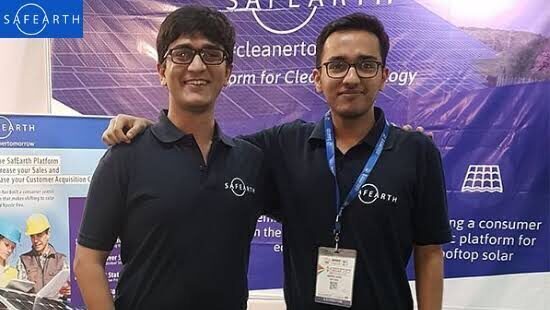 The cleaning and green energy markets are among the industries that will prosper in the future. The future looks promising with growing economic growth, government policies & legislation, and strong expenditure & production in the industry. India ranks fourth in the global green energy industry, according to data shared by Invest India. In reality, the country has set an ambitious goal of producing 450 GW of renewable energy by 2030, and SafEarth Clean Technology is helping the country accomplish this feat. Currently, the cleantech and renewable energy markets are in their nascent stage and face issues such as construction and production costs, renewable energy efficiency. And to provide several systemic defects within the renewable energy sector, two friends started a startup named ‘SafEarth’.Working to accelerate the world’s transition to renewable energy, SafEarth claims to be the only clean energy platform that combines all the aspects of a project lifecycle on a single platform.

The birth of an idea

When studying together at the RV College of Engineering in 2014, Bengaluru, Anuvrat and Harshit discovered that green energy prices were below traditional fossil fuel prices. On their path to sustainability and saving the earth, this became a key point for the co-founders. Inspired by this, the duo decided to work in the clean energy sector and joined a renewable energy startup to understand the space better. However, they realised that there several systemic defects within the renewable energy sector that was stopping the industry from reaching its true potential. The Ranchi-headquartered renewable energy startup is making this transition from conventional fossil fuel as easy as buying a phone online.

SafEarth: Milestone in the world of renewable energy

Changing the mindset of society

At the same time, the start-up was able to create safe, well-paying employment for solar plant management in remote parts of India. SafEarth has produced good operating margins year-on-year with 20 employees. In India, the start-up has more than 50 revenue-generating solar projects across states, including Rajasthan, Odisha, Jharkhand, Chattisgarh, Karnataka, and metros such as Bengaluru and Delhi. While generating permanent, well-paying jobs in remote parts of India, SafEarth has been able to save over 50,000 tonnes of carbohydrates.

Today, most consumers do not have the required knowledge and expertise to buy renewable energy plants. It is a buying decision that someone will make only once and live with the consequences for the next 25 years. Thus, it has deterred even the most enthusiastic buyers to often delay the purchase, which is now solved by SafEarth.

Ranchi-based clean energy startup SafEarth has promoted a net investment of over Rs 100 crore into green energy ventures in India. Today, some of the leading firms, such as Toyota, Graphite India, and the CK Birla Company, use it. When they are awarded a solar project on its website, SafEarth charges a performance fee to vendors. In reality, it also charges a monthly fee for the modules they use on the startup’s website from vendors and clients alike.

The start-up has been rising strongly for the past three years, says Harish. After completing projects worth around 3 MW in FY2018-19, a 9 MW project was initiated in FY2019-20 by SafEarth. A 35MW initiative was taken up in FY2020-21.In terms of revenue, the startup has generated healthy operating margins year-on-year. Today, SafEarth has over 50 revenue-generating solar projects in India across states, including Rajasthan, Karnataka, Odisha, Jharkhand, Chattisgarh, and in metros like Bengaluru and Delhi.

The marketplace of the SafEarth Project: Lets clients build a solar project by finding the right system, the country’s suppliers for that specific system, and coordinating the appropriate funding to set up the facility. SafEarth Project Management Tool: This is mostly used by manufacturers to more accurately handle their solar projects by automating multiple phases in the implementation period of the project. It also helps them to gather a variety of valuable project-related details to develop themselves over time.

Acting to drive the world’s shift to renewable energy, SafEarth strives to build a forum that offers the best resources and knowledge for global customers. Tools and information can enable them to handle their investments in the area of renewable energy.