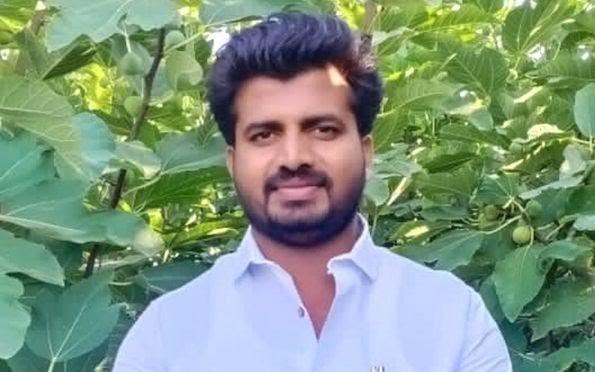 It is always a safe thing to pursue your heart and supposedly crazy dreams, and the tale of this Maharashtra man is a witness to this statement. Samir Dombe of Daund agreed to quit his career in 2013 to farm figs after 1.5 years of juggling with a hectic lifestyle and corporate job pressures. His family and friends were not even respectful of him. He proved his worth, however, today by managing to gain a turnover of a whopping Rs 1.5 crore.

Samir faced a lot of opposition from his family even after coming from a farming background, given the instability in the agriculture sector. In 2013, in his hometown, Samir Dombe decided to leave his corporate work and take up agriculture. A native of Daund, about 90 km from Pune, Maharashtra, he worked for an engineering solutions firm and used to earn Rs 40,000 a month. However, he realized hectic travel after 1.5 years of work and frequent shifts in work pressure were not worth the money. He then chose to grow figs, which is now a tradition in which his family has been active for two centuries.

Not a single male, or even my friends, in my family accepted my decision,” Samir says.” But now, by selling figs, I have a turnover of Rs 1.5 crore a year.” Samir’s parents felt it would be hard for their farmer son, who is in his 20s, to find a match, as they thought salaried professionals would be given preference.” Everyone was convinced I wouldn’t survive in the ecosystem of agriculture,” he adds.”

Samir had in mind a couple of proposals. Growing up in a farming household, he was familiar with farming techniques and started farming on 2.5 acres of land. Instead of selling the figs directly on the market, however, he began to bundle them into boxes of 1 kg and addressed various market segments. “A friend suggested that I approach the supermarkets by looking at the smaller boxes,” he says. “The deal was signed with one of them, and I began selling figs under the name ‘Pavitrak’ in three other supermarkets after a good response.”

The commodity soon began to hit Pune, Mumbai, Bengaluru, and Delhi.”The packaging referred to the company’s phone number and address,” Samir tells The Better India. Customers who enjoyed the product continued to personally contact us. To organize and make bulk orders, they formed small groups.” He adds that it was not only about targeting the buyer differently, it also helped him to earn more profits.”

Figs are rich in nutrients but, depending on geographical conditions, grow selectively. Daund is suitable for the fruit since it is hilly, water quickly percolates, and there are medium evaporation levels in the region. As the highway is only 10 km away, the farm is away from the noise, and there is access to clean water,” Samir says. The commodity was of good quality, which was favored by buyers, owing to the optimal weather conditions. Furthermore, there was no commercial supply of fruit on a wide scale. “At the right time, which is the most significant aspect of marketing, I happened to fill the gap,” he says.

He gradually expanded his farm size from 2.5 acres to 5 acres and set up food processing units to manufacture fig jam, pulp, and other items. Samir claims his close interaction with customers helped his company prosper during the lockout of Covid-19. I have reached out to several clients who have expressed input and have personally contacted them. Even when supermarkets did not accept our fruit, we started taking direct orders on WhatsApp, and sold the stuff, he says. During the lockout, he won about Rs 13 lakh.

From founder To farmers

Having worked for seven years in agriculture, Samir has a message for the sons of all the farmers. For more than two decades now, farmers’ children have been learning and taking on private-sector jobs to gain a steady and lucrative salary. The move has created a massive void in the agriculture industry,’ he says.

He adds that farming remains primarily an unorganized industry that needs to be more streamlined. The farmers’ children were literate and gained corporate income. But no educated person has returned to agriculture and used their education for its improvement. It has to change the situation,” he says.

There’s no point in only criticizing the government, the agri-entrepreneur says. We need to sell and advertise our farm produce like corporate markets, have innovative taglines, and emphasize nutritional value. That is how farmers are going to make progress,’ he says.