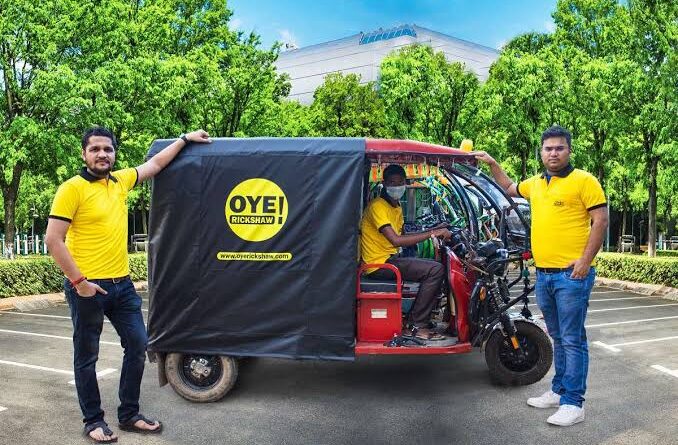 Mobility remains one of the major obstacles in India, considering the existence of many cab aggregators and travel agencies. The country’s shared mobility market is estimated at $630.7 million and is projected to hit $3.44 billion by 2024. Given the rising traffic, only 18 percent of Indians own vehicles; most choose public transport as a means of commuting. About 65% of daily commuting requires a distance of 0 to 10 kilometers, and still, one of the toughest obstacles remains the last-mile commute. This is where Oye! Rickshaw comes in.

IIT-Delhi alumnus Mohit Sharma and his school friend Akashdeep Singh, an alumnus of NIT-Allahabad, agreed to launch Oye! Rickshaw in Delhi in January 2017. Oye! Rickshaw is a forum for electrical rickshaw aggregation that operates within a 5 km radius. The start-up focused on electric mobility and shared travel, launched operations in June 2017. Launched with full-fledged operations in Dec-18 after Matrix Partners boosted USD 1M. The Delhi-based start-up makes it easy and cheaper for e-rickshaw drivers to earn a livelihood. The 4-member Oyepreneurs team expanded to 30.

Over the last 3-4 years, electric rickshaw has become the preferred last-mile commute mode for office goers in the Delhi-NCR area, especially in and around metro routes and densely populated pockets. As of now, about 80-90 percent of e-rickshaw drivers run independently and are not connected to any application or website to create demand. On Indian highways, there are about 20 lakh e-rickshaws. Though there are over two lakhs in Delhi, the remainder is scattered throughout the country in Tier-2 and Tier-3 towns. It is remembered that the e-rickshaw services were not completely unorganized, so the founders felt that a successful approach might be an aggregation network. They could capture not only the market but also help commuters and e-rickshaw drivers in an environment-friendly way.

Delhi-based Oye! Rickshaw is a forum for electric rickshaw mobility connecting driver-partners and customers. The aim clients are individuals who receive around Rs 20,000 a month. They are based on public transit and the standard aggregator cabs can not be afforded. They had about 15,000 enrolled clients and about 70,000 trips within four months of being available. For the time, Oye Rickshaw! There are 400K registered customers and 20,000 trips a day are available on the app. Oye-Rickshaw start-up for drivers & consumers is turning life ‘Green.’

Presently, Oye! Rickshaw says it has more than 25 trips per client per month. Three months in, Oye! More than 70,000 rides and over 15,000 customers were registered by Rickshaw. Oye! Rickshaw, which has 12 Delhi running hubs.Other than Ghaziabad, Oye! Rickshaw has on-boarded more than 1,000 e-rickshaw drivers across West, Central, and East Delhi. These e-rickshaws are capable of traveling up to 80 km a day. The start-up takes about a 15% fee from the sum that the driver makes. Oye! Rickshaw aims in a budget-friendly way to tackle the dilemma of last-mile problems. There were many difficulties faced on the route, such as developing a strong team and gaining drivers’ confidence.

By supplying the public with last-mile networking and distribution options, E-cars lower emissions. To support the dedicated km and battery life cycles, the start-up offers powerful battery technology. Without having to pick-up and drop off every time, Oye! Rickshaw makes what it calls ‘one-tap booking.’

As mobility startups continue to draw the interest of founders, electric app-based oye! rickshaw raised $10 million  In a Series A round. The round was led by Chiratae Ventures along with the participation of Xiaomi and Pawan Munjal. Oye! Rickshaw has raised undisclosed capital, including Prashant Malik, Anand Chandrasekharan, Navroz Udwadia, and Matrix Partners India, from Snapdeal Founders Kunal Bahl and Rohit Bansal, and other individual investors. The Oye! Rickshaw was priced at between $30 million and $35 million. Oye! Rickshaw earns sales of $10.6K per employee. A total of $10M in funding has been received by Oye! Rickshaw. Oye! Rickshaw’s top competitor is SmartE, led by Goldie Srivastava, who is their Co-Founder & CEO.

Through its open, electric, micro-mobility, tech-based marketplace, Oye! Rickshaw links real Bharat to public transport and nearby public places. The start-up addresses the everyday travel concerns of individuals, making it a smooth, secure, accessible, and comfortable experience for clients. With our 100% plug-in electric rickshaws, they do it all. Bharat’s way of traveling is changed by giving convenience and warmth to millions of riders who use public transport every day. By delivering the largest collection, outstanding customer care, lowest pricing, and unprecedented advantages, Oye! Rickshaw has represented more than 5 million clients.

They change the way India travels every day by being the most accessible e-rickshaw booking site, providing all of its riders with a smooth trip booking experience and hassle-free service. OYE is India’s largest and fastest expanding shared tech-based micro-mobility marketplace in the regular commute segment of up to 5 km.