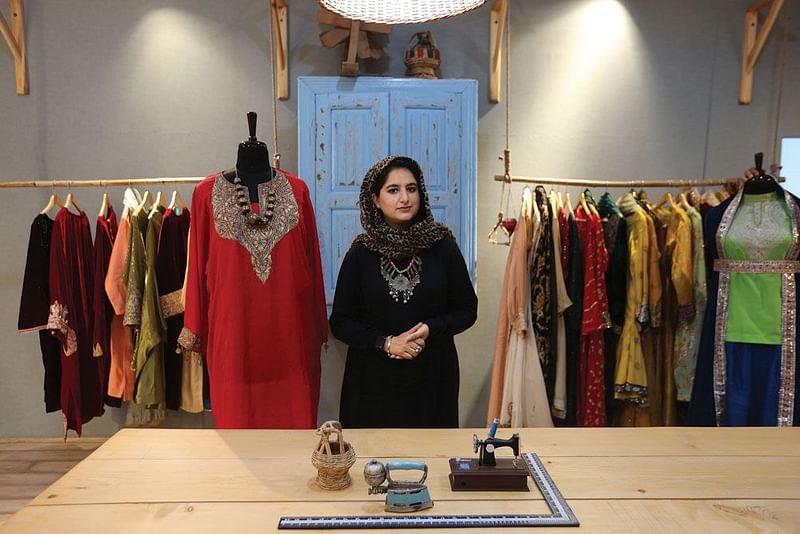 Iqra Ahmad is young, energetic, and, most significantly, the first woman in Valley to open an online apparel business. The 28-year-old Srinagar-based female entrepreneur owns and operates the “Tulpalav” online apparel business. Tulpalav, the Valley’s first online apparel store, was founded by Iqra Ahmad to display traditional Kashmiri designs with a modern touch. Today, Tulpalav is more than simply a fashion trend for Iqra; it is a personal endeavour to reflect the culture she belongs to. She desired that the “Kashmiriyat” be reflected in what people wear and how they wear it in her art.

Tulpalav- Reviving the “Kashmiriyat” through Clothing

Iqra Ahmad chose to open her own boutique in 2015, specialising in traditional Kashmiri attire. She chose to pursue the internet way, starting with the first in the Valley, as a fashion lover. Tulpalav was founded by Iqra, a native of Srinagar’s Sanat Nagar neighbourhood, to exhibit Kashmir’s best weaves and patterns. There was no internet company in Kashmir at the time, so she launched her online business in 2015 with just Rs 10,000 and no financing.

Tulpalav is now a successful online store with clients from all over the world. With over 37,000 followers on Instagram, she is a force to be reckoned with. The team is dedicated to reviving Kashmiri art, culture, and legacy in order to avoid its extinction. Tulpalav is a forum where people may share their perspectives on fashion with the rest of the globe. It is, in fact, an effort to portray Kashmiri culture to the rest of the world.

She is from the Srinagar district’s Sanat Nagar neighbourhood. Iqra says she has always wanted to be a fashion designer, but because there are no fashion colleges in Kashmir, she opted to pursue other interests. She went from one pillar to another in search of work after graduating from Kashmir University with degrees in economics, psychology, and linguistics. In the end, she chose to establish her own place.

She chose to open her own clothing business despite having no professional training in fashion design. She had an idea to establish her own fashion business. There was no internet business store in Kashmir at the time, so she chose to be the first to start one. She began her firm with barely Rs 10,000 and no credit or bank financing. She launched the first online apparel company in Kashmir with this small sum under the name “Palav Forever in Style,” which was subsequently renamed “Tulpalav” exclusively.

A blend of the traditional and modern

Tulpalav provides a wide selection of apparel meant to mix current fashion with Kashmiri tradition, including pherans, kurtas, pleated skirts, and wedding gowns. Iqra gives careful consideration to every detail, from material selection to design, sewing, and embroidery. A tilla-work (gold or silver thread embroidery) pheran that has attracted a lot of interest from consumers.

Tilla is gold or silver thread embroidery that originated in Iran’s Zari village and was brought to Kashmir by Mir Syed Ali Hamdani in the 14th century. Iqra does design, sewing, and embroidering in a very trendy style while employing Kashmiri material in the products. she mixes the contemporary trends with the traditional Kashmiri designs.

Every month, she receives over 100 orders from all around the world, and her company is flourishing. Tulpalav also has a personal app that can be accessed via a URL and lists items based on their availability. When a product is sold, it is either deleted or marked as sold. Customers who are interested can contact the team directly, and once an order is placed, the team gets to work on it right away, providing essential information regarding the product and its delivery. Customers have the freedom to inspect the goods, and if they don’t like them, they may return them right away. If necessary, the items can also be returned within a week for re-fitting and other correctional purposes.

Breaking the stereotypes and flourishing Kashmiri art, culture and heritage

When you start an online store in a location like Kashmir, there are certain to be challenged. Iqra’s firm is completely reliant on the internet, and engaging with consumers via Instagram, Facebook, and Whatsapp on 2G internet is tough. It is a horrible scenario for individuals who run online enterprises when there is no internet for months at a time.

Buying materials, creating a product, having it sewn, photoshoots, uploading and editing, and packaging the goods all suffer as a result of the lack of internet. Despite this, Tulpalav shines brightly in the midst of all the sadness. Iqra’s devotion and hard work ought to be commended. “I’m working hard to preserve Kashmiri customs. Iqra continues, “As a group of ten, we are working tirelessly to resuscitate Kashmiri art, culture, and history in order to avoid its extinction.”