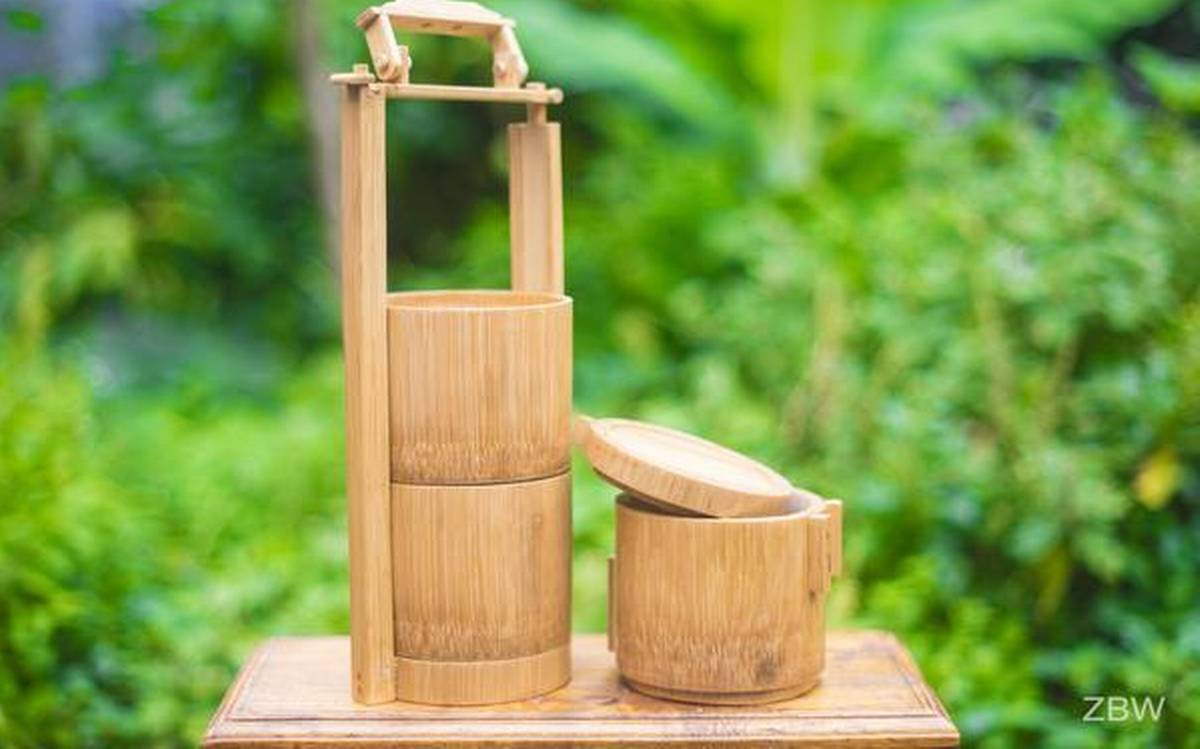 Bamboo products have been used in Manipur since the dawn of time, especially in the hill districts, where ancestors relied heavily on bamboo materials for anything from household items to house building. A 27-year-old young artisan from Churachandpur district is bringing bamboo goods to new heights and has produced an eco-friendly range of tiffin boxes that is gaining popularity among netizens.

V Ginkhanpau has sought real happiness amid nature since he was a child. Any of his fondest childhood memories include foraging for bamboo shoots, wild fruits, and berries in the deep forests of Manipur. Bamboo, too, has a similar look. V Ginkhanpau, a self-taught artisan, was exposed to artistic works at a young age while interacting with his peers with bamboo materials.

Ginkhanpau didn’t have to think too much about what he wanted to do after graduating from Class 12 because he already knew what he wanted to do. He also understood what he was good at making intricate handicraft pieces out of bamboo that is both beautiful and practical. Ginkhanpau now runs a prosperous eco-friendly handicrafts company called Zogam Bamboo Works (ZBW) in Lamka, Manipur’s Churachandpur district, with his friend and business partner Golan Suanzamung Naulak.

Ginkhanpau, the younger of the two brothers, faced adversity early in life. He lost both of his parents while still in Class IV, and he has had to support himself and his sister since then. Ginkhanpau established his start-up firm, Zogam Bamboo Works (ZBW), in Zenhang Lamka city, Churachandpur, in 2014 with a capital of Rs 2,000 and a small workshed. He could now receive somewhere between Rs 20,000 and Rs 25,000 a month.

In 2015, he completed a one-month bamboo product training course at the Cane and Bamboo Technology Center (CBTC) in Byrnihat, Assam. Since then, this young entrepreneur has been hard at work fine-tuning his company’s over 20 products. Around five craftsmen, all in their early twenties, worked at Zogam Bamboo Works under the direction of Ginkhanpau, producing a variety of products ranging from decorative arts to a pen drive with a bamboo cover.

The talented craftsmen at Zogam make beautiful, eco-friendly, and utilitarian items ranging from pens to water bottles to decorative parts made of bamboo. Their most recent invention, the bamboo tiffin box, recently went viral after IFS officer Sudha Ramen posted a video uploaded by co-founder Golan on Twitter. The newest addition is a bamboo tiffin box that is both sturdy and stunning.

And what drew everyone’s attention to the new model is a revolutionary three-level storage system built entirely of bamboo, from the handle knobs to the nail replacement. According to the young entrepreneur and artisan, the tiffin, which is made of dragon bamboo, also known as gomi, will hold both hot and cold food and will last at least three years. Another product that is highly demanded by customers is bio-degradable and natural air-tight bamboo water bottles.

Today, Ginkhanpau Vualnam, a bamboo craftsman from Chrachandpur, Manipur, is attempting to set the Guinness World Record for the largest Bamboo pen. In June of last year, his patented company, Zogam Bamboo Works, petitioned the Guinness Book of World Records for the record attempt. He then set out on the daunting mission, following the orders of the Guinness Board members. He spent over 180 days crafting the pen, which measures 7020.50 mm in length (including the cap), 6580 mm in length (without the giant pen’s cap), and has a diameter of 125.50 mm in the middle and weights 18 kg. The entire pen is made of bamboo except for the nib which is also stuffed with cotton and can be loosened to refill.

A road to sustainability

Ginkhanpau hopes to establish a popular facility centre for Zogam and bring in all of the youths he has trained so far to continue to encourage creative bamboo applications and use local capital. The young entrepreneur believes that establishing such a dedicated centre would demonstrate that handicraft work can also support our livelihoods. Ginkhanpau has educated over 100 young people from Manipur and other northeastern states in bamboo work to date.