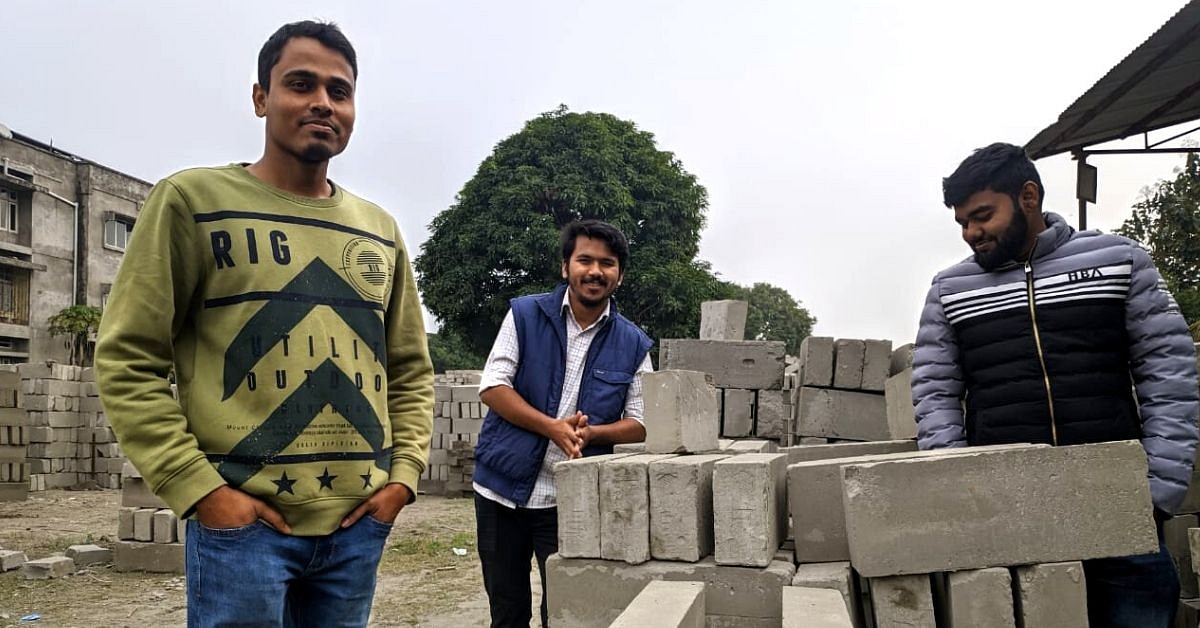 We may not all be trained architects, but we all have a clear understanding of the materials that go into constructing a house, and among the many elements, bricks are perhaps the first thing that comes to mind. But did you know that bricks aren’t exactly the most environmentally friendly material? When bricks are made in kilns, toxic particulate matter (PM) is released, contributing to air pollution. Furthermore, traditional bricks are made by digging or using clay. This will deplete the ecosystem of fertile topsoil, which is essential for agricultural production.

Rupam Choudhury, an entrepreneur based in Guwahati, Assam, is one of the three co-founders of the Zerund Bricks startup. Rupam, Mousum Talukdar, and David Pratim Gogoi (the co-founders) came up with an alternative after learning about the detrimental effects of traditional bricks. Using fly ash from thermal power plants, waste plastic, and cement, the young innovators produced a proprietary Plastic Embedded Lightweight Brick.

Around 70% of the bricks are constructed from scrap materials and are manufactured using electric machines rather than kilns, reducing greenhouse emissions. These bricks are 10% lighter than traditional bricks, and one Zerund brick is equivalent to six conventional bricks, making them extremely cost-effective. They can have 10 to 12 percent more thermal insulation than normal bricks, suggesting that a building built with these bricks would be cooler in the summer and colder in the winter.

From a College Project to a Business Venture

Rupam, Mousum, and David met at Assam Engineering College, where they were studying Civil Engineering. Rupam remembers that in the seventh semester of their academic year, all of the students in the class were expected to work on a project in structural engineering involving environmentally sustainable materials. Mousum was the one who came up with the notion of making bricks out of scrap materials like plastic. About the fact that the seventh semester had ended, Mousum continued to focus on the concept of determining the proper proportion of each variable. Rupam joined him in research and development at this time, ensuring that the invention will see the light of day.

They now had to choose between getting a job and launching a business based on their low-cost, environmentally friendly bricks. As we all remember, the trio chooses the latter. David was instrumental in helping them establish contacts whilst they were working on the startup. They started looking for investors as well, knowing that operating in this space would necessitate money.

They rapidly built a 21,600-square-foot manufacturing facility in Azara, Guwahati, which marked the start of their operations. When the startup was created in September 2018, it was born out of an idea that began as a college project. They’ve served over 1000 clients and sold over 2.5 lakh bricks since they started their company! These bricks have been used to build at least 50+ big apartment complexes among other buildings in Assam, Arunachal Pradesh, Meghalaya, and Nagaland.

Each brick measures 500 mm in length, 200 mm in height, and 100 mm in thickness, and weighs approximately 8 kg. One of these bricks has a tensile strength of 4 to 5 megapascals (MPa). Rupam also points out that since the area gets a lot of rain, water will seep into buildings and houses, causing damage to the walls. However, Zerund bricks have a water absorption rate that is almost 15% smaller than traditional bricks. This means that building walls and other buildings are not easily destroyed.

The first issue was that, as a newcomer to the industry, they did not have the same capital savings as most firms. They are now able to have their product on loan for a period of two months thanks to customers and a growth in the number of clients. Another problem they faced was their reluctance to take on larger tasks due to a lack of manufacturing resources. However, they are now running out of two units, which has changed the situation.

The Assam-based startup was also praised for its creativity. They applied for the India-UN Fund in January 2018 and were chosen as the winners out of 200 applicants, winning the award for ideation. They were then incubated by IIM Calcutta under the NIDHI – Entrepreneur in Residence (EIR) program from December 2018 to April 2020. They were able to scale their activities and research and development thanks to the mentorship and grant they got.

By 2022, the startup intends to open five more locations. They still plan to extend their product line by innovating tiles and paver blocks while maintaining the same long-term principles. Rupam explains that they still like to set up small units on building job sites because many clients have requested this in the past. These bricks are not only environmentally friendly, but they also provide better thermal insulation than standard red bricks. Zerund Bricks are game-changers in the construction industry, with production ranging from 200-250 bricks per day to 2,000 bricks per day.