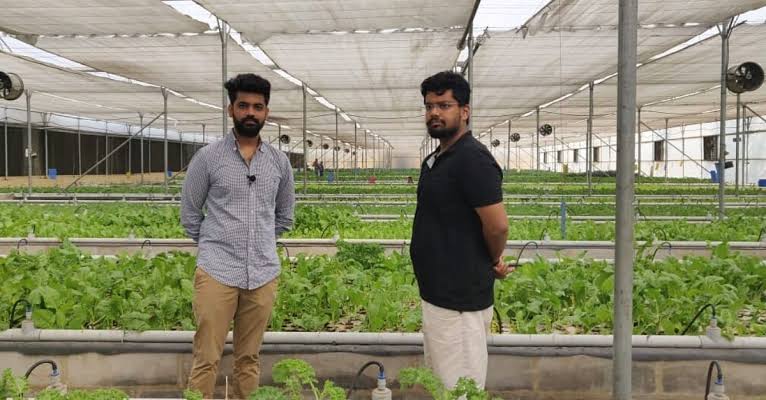 Maharashtra’s Western Belt, Kolhapur district, is renowned for its jaggery, footwear, and tourist locations. But along with all that, it is also renowned for cultivating rare organic vegetables. And it’s because of aquaponics and hydroponic farms that have settled on a limited area of 50 acres of tropical crops for production. Exotic plants are grown here and sent to other cities in the world, including Kale, Spinach, Pak Choi, Mushrooms, and 40 other varieties.And, the most significant thing to remember is that the cropping trend has not changed by locals, this has been achieved by IIT-Bombay alumni with no experience in farming. And the initiative is named as LandCraft Agro.

When studying engineering at IIT, Mayank Gupta and Lalit Jhawar became friends. From 2012 to 2018, Mayank started a start-up called Zilingo and traveled through Southeast Asia, while Lalit entered his family company in the textile and real estate industry back in 2011. Lalit Jhawar and Mayank Gupta decided to penetrate the supply chain of organic food and import and supply fresh organic goods through the different cities in India, finding that there is hardly any agriculture in India. They, therefore, decided to delve deeper into this issue, eventually leading to the establishment of one of the largest aquaponics farms in India in 2018: LandCraft Agro.

Registered in 2019, LandCraft Agro has made a name for itself in the list of top suppliers of Exotic Vegetables, Lettuce in India. The supplier company is located in Kolhapur, Maharashtra, and is one of the leading sellers of listed products.

One agriculture start-up in India is aimed at revolutionizing the agricultural industry. Established in 2017, Landcraft Agro uses aquaponics technologies and enclosed, climate-controlled greenhouse systems to cultivate the highest quality greens and herbs such as kale, chives, and spinach. Landcraft Agro has revolutionized India’s production of organic goods grown locally. They have developed a flourishing ecosystem nestled in the suburbs of Kolhapur, Maharashtra, clubbed with high food safety standards, to grow sustainably and efficiently – just the way Mother Nature will have it! LandCraft Agro employs > 80% women in its workforce, providing them with constant employment and better working conditions than their previous workplaces.

Mayank and Lalit founded LandCraft Agro in Ichalkaranji, 30 km away from the city of Kolhapur, in April 2019. On 20-acre hydroponics and 3-acre aquaponics plantations, LandCraft produces 40 kinds of vegetables. Nearly 150 farmers were educated to turn 100 acres of land into poly-houses for vegetable cultivation. And, under their brand name, Trueganic, their vegetables are sold. A one-year-old start-up receives a monthly turnover of Rs 80 Lakh. But yes, by rising organic food, entering a niche market was not less than a challenge. In addition to cities in Maharashtra, the vegetables are sent to Hyderabad and Chennai and flown to Delhi. A one-year-old start-up churns out a monthly turnover of Rs 80 lakh. While the earnings look promising, entering a niche market by growing organic food was a challenge.

The Growth of Kale

Kale is one of the key greens that Landcraft Agro cultivates using aquaponics. With its high content of vitamins, minerals and omega-3s, Kale is considered a superfood. The market for kale is growing as customers grow more health-conscious. Although kale provides many nutrients, as kale is vulnerable to pests, such as listeria, the plant is difficult to produce. As a consequence, because of pest damage, typical kale farmers frequently lose a large amount of the plant. Aquaponically raised kale from Landcraft Agro, though, has almost a 0 per cent risk of contracting listeria or other pests. Inside an enclosed, climate-controlled greenhouse with a double door, the aquaponics system of the organisation is placed to prevent any pollution. The vents in the greenhouse are screened as well. Besides, since the kale is not cultivated on the ground, rodents are unable to contaminate the kale from the soil.

Landcraft Agro has dedicated washing, processing, and packaging rooms all within its enclosed greenhouse to prevent pollution. To ensure that no pollution can occur during shipping, all kale and greens exiting the greenhouse are sealed. Besides, all plants are packaged to increase their shelf life using Changed Atmosphere Packaging (MAP): MAP will double the shelf life of kale. Sustainable and advanced farming practices such as aquaponics and insulated, climate-controlled greenhouses enable companies such as Landcraft Agro to develop higher-quality greens and herbs more efficiently. Despite the high initial investment, these technologies have a high return on investment as they use less water, minimize crop damage, and produce higher quality plants.